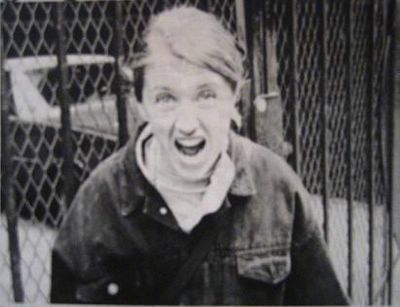 When Liz Phair decided to record her breakthrough album Liz Phair, she knew she was taking a big risk. From Fleetwood Mac to Pink Floyd to Genesis, the history of Rock and Roll is littered with bands who lost everything after trying out a more accessible sound. Often, you see, the people who initially like a band or singer are kind of strange and don't enjoy catchy melodies or decent production or lyrics that normal people can understand. These people are mostly concerned with "being the first" to be fans of a new group, and they don't really care what the music sounds like. When the band or singer finally learns how to make good records, it seems to annoy this early group of admirers (probably because they don't want to share their "discovery" with other people), and though they're few in number they wield an incredible amount of power over what songs get played on the radio, much as the liberal press has a disproportionate influence on the news we read. Suffice it to say that Liz Phair risked losing her career as a singer, and she knew it!

But, in her heart, she knew that she had a message to deliver and that she didn't want to spend the rest of her life singing to tall pimply boys in college who couldn't get dates, who only enjoyed poorly recorded music, and who thought that Liz Phair's lyrics meant that she wanted to sleep with them. Liz wanted to empower women, and so she forged ahead.

The only other artist I can think of who really succeeded in a similar way is Brian Wilson, the lead singer of an old band from the 1960's called The Beach Boys. When Brian Wilson first decided to record a rap song, his overly conservative fanbase was horrified. But Brian, a musical genius with a vision (much like Liz Phair), ignored the naysayers and the result was one of his best songs ever: Smart Girls. As we all know, rap is now generally accepted as the most popular, and in fact best form of music, so obviously Brian Wilson knew a lot more than his audience. Think about how many people today even remember the Beach Boys vs. how many people like Eminem, and I think it's obvious that musicians should pursue their own path and not pay attention to what clingy selfish fans might think.

And that's just what Liz Phair did with Liz Phair. From the cover art, to the lyrics, to the catchy songs and great production, she delivered an innovative and high quality product, old fanbase be damned. If they couldn't follow along with her, she'd leave them behind. Keeping up with Liz Phair started to feel like chasing the whirlwind: exciting, and just a bit dangerous!

Tomorrow is the last edition of Liz Phair week. We've covered a lot of territory over the past few days. Don't miss the wrap-up!!