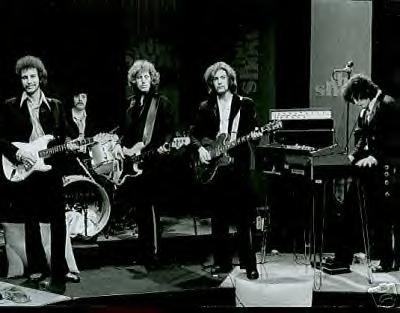 I wrote about the 2nd New York Rock And Roll Ensemble album some time ago, but it took me forever to get a copy of their first record. For those of you reading this who can't be bothered to click that link, The New York Rock & Roll Ensemble were a late 60's group that featured several Julliard students (who loved to mention this fact) and combined classical tidbits with some often very good orchestral pop. They probably annoyed some people back in the day who (correctly) realized that rock wasn't going to get anywhere much by kissing up to trad classical. A poster advertising them on a bill that also includes The Stooges, MC5 and Sun Ra indicates potential problems, but thirty-five years later distinctions like that are moot and we're left with some very nice albums that ought to be more widely known.

As it turns out, their self-titled debut averages out to being about on par with the second album Faithful Friends. The very best songs are slightly better, while the cheesy Broadway-isms that bugged me on album #2 are slightly cheesier. Put together, the two records would have made a really worthwhile CD reissue as they include about an album's worth of great material combined. The debut finally came out on CD earlier this year (without any bells and whistles) but Faithful Friends remains vinyl-only as I write this, and there are apparently a couple of uncollected early singles. Hopefully someone will do a better job eventually.

I was poking around the internet recently and found this very fascinating discussion, which includes some reminisces about TNYR&RE as well as info about film appearances and live tapes.

From the debut, here are two of the best tracks. You Know Just What It's Like has an especially cool bridge, with backing vocals panning around all psychedelic like. And the fuzz-meets-Eastern Studeao Atlantis is probably the most interesting thing the group recorded. As best I can tell, the lyrics include all the band members' names. The song also demonstrates what the group might have achieved if they'd looked to more exotic musics than Bach for their inspiration.

As an example of everything that could go wrong with their ingredients, here's Pick Up In The Morning which starts out promisingly until the cast of Harold & Maude (The Musical) jumps onstage for a rousing chorus that'll have toes tapping in theaters throughout the midwest.

Our cable is due to be fixed on Thursday. This post brought to you via the magic of dial-up America Online, reminding me of the days when I started this blog and spent two hours every day uploading songs. Ah, memories.