Yikes, it's almost September. Did I spend August writing pieces for Mystical Beast? I did not. I'll muddle through till October, but it may not be pretty.

Some exciting news on the horizon, though MB will be gone by the time it comes out. I've been contacted by someone who's working on a CD reissue of Steve Kipner and Steve Groves' Steve & Stevie record, which pre-dates their Tin Tin albums. This to be followed by reissues of the two Tin Tin albums plus a few non-album singles.

(Anyone who's been reading MB for a while knows who these guys are, but I'll refer newbies to pieces on Skyband and Friends for more details. Incidentally, I'm currently sending the Skyband tracks to the person who's working on the re-release, who's planning on forwarding them to Steve Kipner who apparently doesn't have his old band's recordings. Meaning that the Skyband tracks are available for a day or so for anyone who missed them. Just click on the links in the old Skyband pieces -- they work again. You need to hear Bang! Ooh! Ya Got Me!) [Tracks down as of September 7th...sorry, you missed the boat.]

In other news, there's a website up now devoted to Pete Beckett, former member of Skyband and Friends (briefly) with Steve Kipner. Wow, I'm actually feeling like I may be remembered as the guy who got the ball rolling on the great Skyband reunion of 2009!

I guess I'll resume writing next week with some brief bits on Tin Tin. I'd originally planned an extravaganza, but since reissues are on the way, I'm scaling things way back. For my money, Tin Tin's 2nd album Astral Taxi is a contendor for Great Lost Bee Gee's Album (not that it's exactly a carbon copy of the Bee Gees, but I don't think you'd have much trouble shuffling it in with Odessa on your iPod). 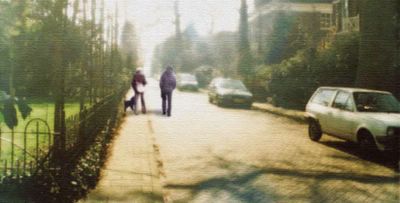 Readers of this blog and the Lacunae blog may recall that back in the ancient 90's, following two fantastic full-lengths and assorted singles etcetera, underrated glam-folk-pop-shoegazers The Nightblooms ceased to exist. Some years later, singer Esther Sprikkelman and guitarist Harry Otten reappeared faintly on the radar screen as Safe Home. They released a self-titled CD EP, five limited-edition 7" singles, and a full-length CD (which, annoyingly, collected the EP and limited-edition 7" singles) on the semi-dormant Sunday Records label.

A new Safe Home website has since winked in and out of existence. The front page is here, but it doesn't currently lead to anything useful. Those of us who keep a close eye on such things, though, noticed a handful of realaudio tracks that were briefly linked some months ago (they're still sitting here, hidden behind some socks and underwear). I wrote to the group a while back, and was assured that a new album was forthcoming on a label called Now Here Records (no website that I can find). Since then, nothing, though a new mp3 called Nog Niet Voorbij appeared recently in the dresser drawer. My best guess (any Dutch speakers want to correct this?) is that it means "Not yet finished" which would almost seem like the band is sending out tiny messages in a bottle. We're still here.

Safe Home ditch the louder side of The Nightblooms, and concentrate on a pastoral hum, with tiny electronics popping out of the cracks of a well-worn acoustic. Which is often an electric guitar, actually, but that messes up my beautiful imagery, and it's a very subdued electric anyway. If you own either Nightblooms album, Safe Home sound like the final track. Esther's voice remains as lovely, breathy, and distinctive as ever, and the overall effect is of whistful nostalgia (like you get when you think about a band you used to love who live far away and can't seem to get their records released anymore).

I'm hoping that a 2nd Safe Home full length will emerge someday. Ok, I'm really hoping that they'll reunite The Nightblooms and put out a hyper-produced monster of a follow-up to 24 Days At Catastrofe Cafe, putting everything this side of Bohemian Rhapsody to shame. Unfortunately, at present I find it hard to believe that more than a handful of people are still paying any attention at all. Here's a quick Safe Home/Nightblooms sampler, including a few of the new unreleased tracks converted to mp3 from realaudio.

Birthday is a track I've posted before, from the You Can't Undo What's Already Undid CD. It's probably the closest Safe Home have come to The Nightblooms, though it's much softer than most Nightblooms tracks. If you imagine the production dialed up to 11, this could have fit onto 24 Days at Catastrofe Cafe.

They Say It seems to be the most fully realized of the new (unreleased) tracks.

Dear Dusty is also from You Can't Undo What's Already Undid and the Safe Home EP. The Nightblooms/Safe Home have never been coy about their CSN&Y side, and this is a pretty clear example. Is it me, or does the word "elegiac" spring to mind with regards to almost every aspect of this band?

Leda is also currently unreleased. Some of the best-conceived pop minimalism I've heard this side of Young Marble Giants.

For some historical perspective:

Never Dream At All from the early Nightblooms single Crystal Eyes. There's a song in there somewhere.

Never Dream At All from 24 Days At Catastrofe Cafe. Oh, here it is. We will rock you.

A Thousand Years from the Nightblooms' self-titled debut album. Early evidence that the group could do amazing things with extended song-structures. The track Shatterhand from 24 Days is kind of the tour de force of this side of the group, and one of my favorite songs period.

Since this is probably the last time I'll write about The Nightblooms, I'll once again note that there's a one-sided live album that Allmusic can't be bothered to mention. It documents the band much as they sounded during their one US tour (i.e. the noisy Nightblooms). Seek it along the winding paths of the internet. The fact that I saw the Nightblooms live (at Brownies, I was there to see someone else) is one of the greater strokes of luck in my concert-going career. 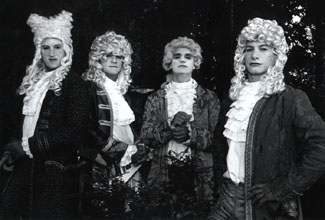 Thought I'd briefly come up for air. While not knocked entirely out of socks, I'm pretty happy with Drunk Horse's 70's-o-rama In Tongues lately. With a few fewer melodic charms than prime Urge Overkill, but a redeeming lack of (audible) smirk, it's the album that I'd be playing on my car stereo if I had a car or a car stereo. Here's Priestmaker, which was previously posted (and is still available, along with another track) over at Ugly Music for Beautiful People. The label site is here, and contains two more mp3s. While it's true that, as Aquarius Records notes, there's a major improvement on the vocals on the new album, don't ignore previous releases. Here's the utterly fantastic Legions from Adult Situations, which discovers a great "whoo-hoo" melody/harmony about 3/4 of the way through.

Drunk Horse might be going down so well in part because I've actually been listening to my Upper Crust albums lately.

Possibly the most fun live show I've seen, though I can't vouch for them nowadays. I'm still not sure why I felt compelled to buy two of their CDs (and there's more that I don't have) but CD #2, The Decline And Fall of the Upper Crust, holds some glimmers of the genius that is/was their stage show. At their best, on tracks like Rabble Rouser, they manage to rock out mightily while bringing a major chuckle to anyone who thinks too much about the "Revolution!" in question. Another Spinal Tap-ish highlight is Boudouir, which operates at a melodic/lyrical level that, unfortunately, they're not always able to sustain. As said, it all works better on stage than on CD, but I'd be lying if I said they weren't one of my favorite bands in concert at one time. The track Vulgar Tongue (which you'll just have to find elsewhere) is pretty damn funny.

Have to say that between Drunk Horse and the (fantastic) new Part Chimp album, I'm not quite as un-hopeful about the state of unpopular music as I've been for most of the year.