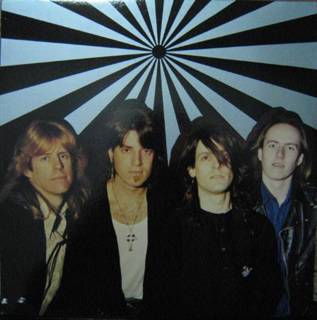 Oriental Head with The Ophelias

Not much of a theme today, or rather the theme is that I'm going to try to exorcise a song that's refused to leave my brain for the last few days.

So, it's back for another dip into The Ophelias. A strange band, and strange in strange ways, led by one Leslie Medford. Lyrics inspired by Shakespearian poetry. Music that's aware of garage rock, olde folk songs, Camper Van Beethoven, The Kinks. Plus trumpet. Rock star chops, and ten-thousand ways of undermining said chops. Silly voices that sometimes work and sometimes don't.

The group's Mr. Rabbit actually hit college radio pretty hard at one time, but only one of the Ophelias' three albums (and one EP...if there's more, I don't know about it) made it to CD. None of the records are good all the way through. All of them have 1-2 songs that you really have to hear. That's why god invented mp3s, downloading, mix CDRs, and friends with big record collections.

So today's track is from the second album, Oriental Head, where guitarist David Immergluck stops by on his way from the Monks of Doom to Counting Crows. And yes, the guitar work is pretty great. Go David Immergluck! And the song that will not leave my brain is Turn Into A Berry, and you know it's the Ophelias because the lyrics go:

I also like the way the song zooms in, somewhat cinematically, in the beginning:

Can't wait to see the movie. At one time there was word of some Ophelias CD reissues with bonus tracks, but I haven't heard any news on that front in a while, and none of the Ophelias would write back to me. It is so weird who will and who won't reply to emails, I've gotta tell you.

Some photos and press clippings are here, and the perpetually tantalizing Ophelias homepage is here (don't get too excited).

"Zeus was a Greek I loved! - LM" carved in the run-out groove.

I'll probably do still more on the Ophelias some other time.